I attended Gertjan Vlieghe’s speech yesterday at the Society of Business Economists annual conference in London. The speech had a market impact because it challenged the consensus perception of Vlieghe as an uber-dove. It had an impact on me for another reason.

But first, a bit of context.

Back in May I was reflecting that many people seem to have become either really cross that monetary policy is way too tight (looking at low levels of inflation), or really cross that monetary policy is way too loose (reflecting either historical anchoring, or looking to debt growth). For a sample of this crossness, you could do worse than look at my compendium of tl;dr versions of submissions to the Treasury Select Committee’s inquiry into the effectiveness and impact if post-2008 UK monetary policy.

Anyway, I drew the following chart, to try to understand this bad-temperedness. 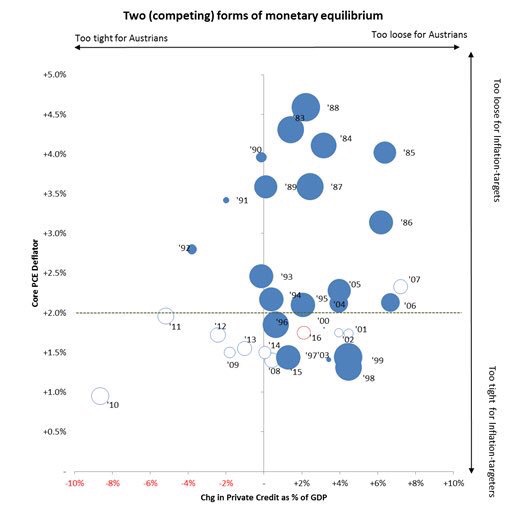 It shows for each calendar year since 1983 the pace of US inflation (y-axis), the change in US private nonfinancial credit to GDP ratio, and then the bubble size relates to the real interest rate (blue is positive, white is negative; large is large, small is small). I can see that the debt folk (I’ve labelled as Austrians, but this is probably unfair) probably reckon that anywhere right of the y-axis means that rates have been too low, while inflation folk see anything below the x-axis as evidence that rates have been too high. In the top right and bottom left quadrants, debt and inflation folk would probably get on okay at a drinks party without coming to blows. The top left and bottom right quadrants are, by contrast, times when these folk are likely to spend most of the time either talking past – or slinging abuse – at one another. You will notice that we’ve spent a good deal of time in the bottom right quadrant in recent years: inflation has been scarce, but real interest rates low and increased leverage forthcoming.

Claudio Borio, Head of the Monetary and Economic Department of the Bank of International Settlements, wrote an interesting paper in 2013 arguing that the idea of the output gap had kind of gone astray. Typically, monetary policymakers seek to identify potential economic growth with reference to non-inflationary economic growth. Borio argued that this is, if not bogus, too restrictive: the pace of economic growth may be unsustainably strong, and the economy operating beyond capacity, if financial imbalances (aka leverage) are building up. In other words, Borio argues that changes in the price level (inflation) and changes in the stock of private nonfinancial credit (leverage) are each important in determining the sustainable pace of economic growth.

I’ve got some sympathy with Borio. If this sounds a bit abstract think of China today: inflation is not a problem, but credit growth is rampant,  perhaps to the extent that it might point to faster growth than is ultimately sustainable. Central bank mandates in many – perhaps most – developed economies are meaningfully oriented towards delivering low levels of price inflation, variously defined. Why? Because inflation is a form of monetary instability. And preventing monetary instability so that people can get on with their lives rather than obsess over the nature of money  – via the creation and execution of an inflation-targeting mandate – seems a pretty reasonable thing for a monetary sovereign to do.

But, as the Global Financial Crisis made baldly evident, inflation is not the only form of monetary instability. During the GFC, Central Banks resurrected their age-old response to this episodic type of monetary instability: by acting as Lenders of Last Resort and clearing up *after the fact* with super-easy monetary policy.

Whether central banks should act *before the fact* and ‘lean against the wind’ so preventing the build up of bubbles has been a live and heated debate probably for as long as they have acted as Lenders of Last Resort. There are good arguments on both sides, simplifying as:

In the speech Vlieghe introduced what he called the Finance Theory of the Equilibrium Real Rate (ERR). At it’s simplest it is an intuition that interest rates are low and the risk premia attached to equities are high when the world is risky. Few would disagree. ‘Risky’ in this context means consumption growth has a lot of volatility, and (importantly) negative skew and kurtosis. The intuition is demonstrated with an historical econometric analysis of a couple of hundred years of UK data, and different regimes are identified – some with a high ERR and some with a low ERR. The different regimes have some shared characteristics of credit growth, realised equity risk premia, realised nominal rates and inflation, as well as distributions of consumption growth (expressed in terms of mean, standard deviation, skewness and kurtosis). I would urge you to read it and make up your own mind whether it says more than real policy rates are very low and equity returns are very strong in periods following economic busts. I think that it does.

How is this linked to thinking about the current state of monetary policy? Importantly, Vlieghe’s Finance Theory of the ERR doesn’t actually help define where the ERR might be, ex ante. But one of the things he associates with high or low ERR regimes is the change in the stock of household credit. If households are deleveraging, chances are that you are in a low ERR regime, and even an ultra-low nominal Bank Rate might not be very far below the ERR. But if households are releveraging, maybe you’re moving *out* of a low ERR regime, and Bank Rate might be very far below the ERR. Over the past year or so, UK households have been releveraging, so a question is introduced as to whether the UK is moving out of a low ERR regime and into a higher ERR. Through this lens monetary policy in the UK may be becoming ever-easier unless Bank Rate is raised. And so Vlieghe argues, without a hint of Austrianism, that the easiness of a given monetary policy becomes defined by changes in the price level (inflation) and changes in the stock of private nonfinancial credit (leverage).

Vlieghe’s Financial Theory of the ERR, like Borio’s Financial Theory of Sustainable Economic Growth (OK, I made up that name), doesn’t argue ‘sure, inflation is important – but there’s this other thing too called financial stability/ leverage to worry about’. It isn’t a new target variable to chuck into your optimisation. Instead, it is a variable that reconfigures other terms in the optimisation process in a potentially unknown and whacky way.

If this understanding is right (and, to be fair, I would be surprised if Vlieghe even recognised it as such) I am left with some questions:

Isn’t inter-temporal substitution supposed to be a pretty major transmission mechanism? And doesn’t this manifest in changes to credit stock? Maybe I should reread James Cloyne’s awesome 2016 paper that finds the transmission mechanism isn’t all about intertemporal transfers, but also about transfers between households.

2. The reversion to *which* mean question.

But if we target stable debt to GDP, are we stabilising at a level that is above or below equilibrium level of debt at a whole economy level? What is equilibrium level of private non-financial sector debt-to-GDP? Is the equilibrium level of debt conditional upon the term structure of interest rates available to, and the whole shape of the prospective distribution of economic growth as experienced by, each debt-bearing demographically-unique cohort? Do we have confidence that we know what this is for any economy?

The whole point of the FPC was supposed to be to a means of exerting control over stuff like leverage growth. This was a sort of nod to the Leaners (without actually going the whole way and saying that rates should be changed to lean against the wind). Is Vlieghe saying the whole project is just a bit rubbish? Or, to put it as a meme: 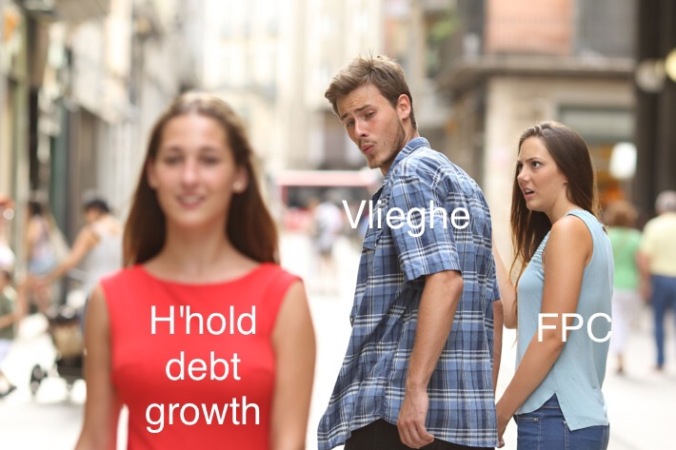 Isn’t the location of all those dots in the bottom right quadrant of the chart more easily explained by the idea that there is global overcapacity in labour owing to a global labour glut that will turn as Chinese governance-adjusted unit labour costs reach developed market governance-adjusted unit labour costs? This dovetails into the @rajakorman question (simply put, is @rajakorman right that the whole thing can be put to bed by adding an international flows dimension).

I didn’t really expect a really impactful speech. I was dead wrong.

Finding patterns in finance, econ and technology -- probably where there are none

You gotta be first or right. If you're both then that's lucky

A blog on macroeconomics and public policy by Tony Yates.